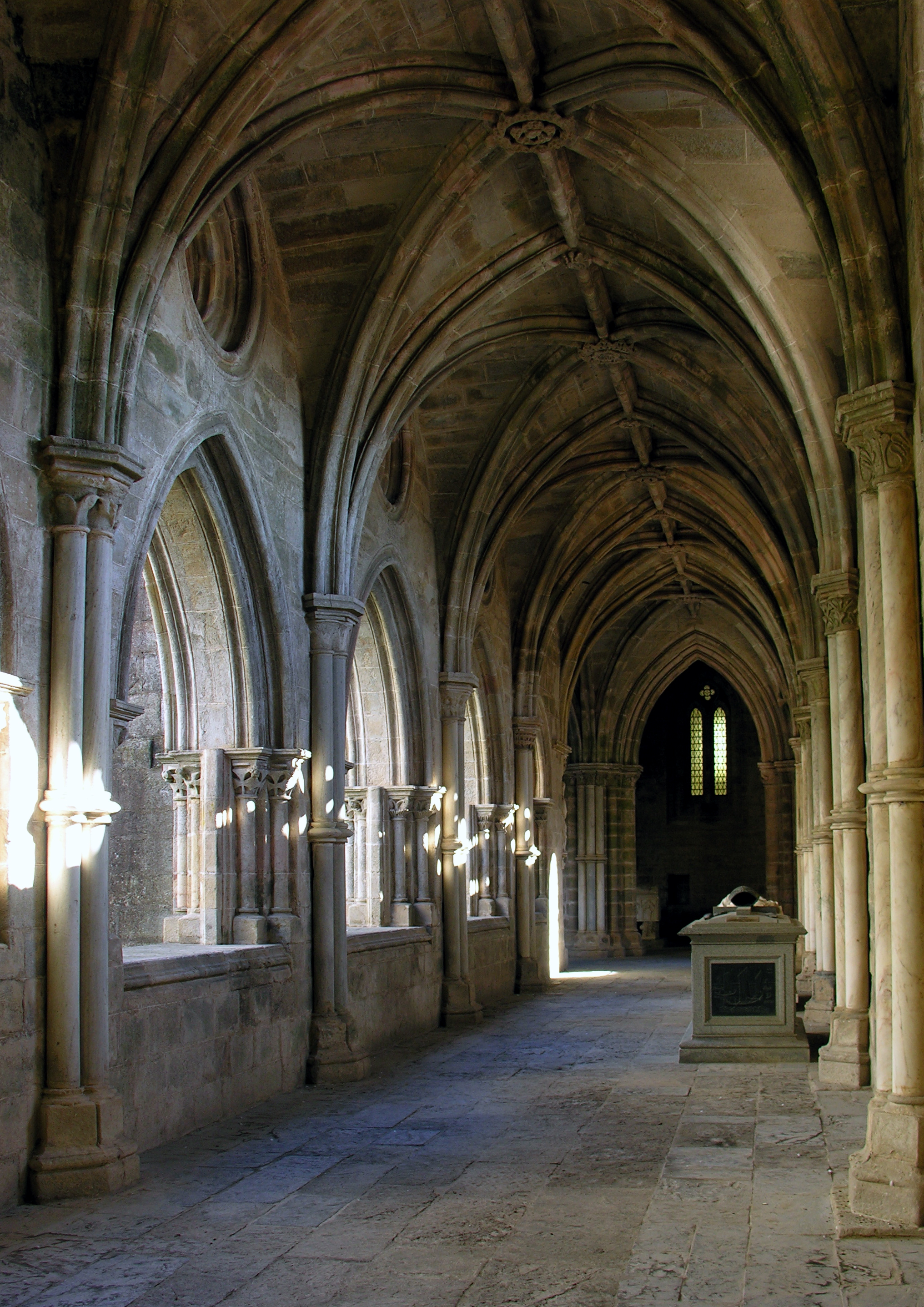 The Cathedral of Évora... - Secret World

The main façade of Évora Cathedral, built with rose granite, resembles that of Lisbon Cathedral. Its two massive towers, completed in the 16th century, flank a narthex (entrance gallery), which encloses the main portal. Over the narthex there is a huge window with Gothic tracery that illuminates the interior. Each tower has a different conical spire, one of them covered with mediaeval coloured tiles. Like other Portuguese churches of the time, the outer walls of Évora Cathedral are decorated with crenellations, as well as decorative arcaded corbels. The lantern-tower over the crossing is very picturesque. It has a row of windows that bathe the transept area with light. Its spire, as well as spire of the tower above the crossing of the transept, is surrounded by six turrets, and each turret is a miniature copy of the tower itself. The design of the tower resembles that of the cathedral of Zamora and the Torre del Gallo of the Old cathedral of Salamanca. The Gothic Apostles in the main portal of Évora Cathedral The ogival main portal is a masterpiece of Portuguese Gothic sculpture. The marble columns are occupied by huge statues of the Apostles executed in the 1330s, perhaps by sculptors Master Pero (Mestre Pero) and Telo Garcia. It is the best of its kind in Portugal. Such free-standing Gothic sculptures are rather rare in Portugal. They are usually associated with memorial graves. Interior The Cathedral of Évora, built mainly between 1280 and 1340, was designed following closely the floor plan of Lisbon Cathedral, which had been built in the second half of the 12th century in Romanesque style. Like that church, the builders of Évora Cathedral designed a Latin cross church with a transept, a nave higher than its two aisles, a triforium (arched gallery over the central aisle) and an apse with three chapels. The crossing of the transept is topped by a dome, supported by pendentives, and an octagonal lantern. The transepts are lighted by two Gothic rose windows, one with the morning star and the other with the mystical rose. The large nave has a pointed barrel vault. The interior space is accentuated by the use of white mortar on the bare high walls, pillars and vaults. View of the central nave of Évora Cathedral. The baroque main chapel is in the background. The upper arched galleries (triforium) over the nave can also be seen. In the entrance, in the first two bays, there is a Manueline high choir by architect Diogo de Arruda (early 16th century), with fine Gothic vaulting. The high choir has Mannerist-style choir stalls carved on oak in 1562 by sculptors from Antwerp. They are decorated with mythological sculptural reliefs and scenes from courtly life, hunting parties and life at the farm. Near the entrance there is also an ancient organ, the oldest still in activity in Portugal, dated from circa 1544 and executed by Heitor Lobo. On the left side of the entrance stands the small baptistery with a fresco depicting the Baptism of Christ, 18th century azulejos and 16th century Manueline wrought-iron railings. In the middle of the central nave there is a large Baroque altar with a polychrome Gothic statue of a pregnant Virgin Mary (Nossa Senhora do O) (15th century); facing the Virgin there is a polychrome Renaissance statue of the Archangel Gabriel, attributed to Olivier of Ghent (16th century). The main chapel was totally rebuilt between 1718 and 1746, a work sponsored by King John V. The architect in charge was João Frederico Ludovice, a German who was royal architect and who had previously designed the Monastery of Mafra. The style favoured by the King and his architect was Roman baroque, with polychrome marble decoration (green marble from Italy, white marble from Montes Claros, red and black marble from Sintra) and painted altars. Although its style does not really fit into the mediaeval interior of the cathedral, the main chapel is nevertheless an elegant baroque masterpiece. The main altar has sculptural decoration by the Italian Antonio Bellini. Portuguese sculptor Manuel Dias is the author of the crucified Jesus over the altar, based on a drawing by Portuguese painter Vieira Lusitano. The painting of the main altar was executed by the Italian Agostino Masucci. The 13 panels of the original painted Flemish retable of the main chapel can be seen in the Évora Museum. The retable was commissioned around 1500 to a workshop in Bruges by bishop Afonso de Portugal. The chapel (Capela do Esporão) in the left transept was rebuilt in the 1520s in Manueline style. It now has a beautiful Renaissance marble portal with a marble sculpture by Nicolau Chanterene, Gothic vaulting and a Mannerist altar with the painting "Descent from the Cross" by Francisco Nunes (c.1620). The chapel in the right transept houses the tomb of the humanist André de Resende (16th century). In these chapels are also buried João Mendes de Vasconcelos, Governor of Luanda during the reign of Manuel I, and of Álvaro da Costa, ambassador and armorer of King Manuel. The cloisters of the cathedral were built between 1317 and 1340 in Gothic style, and again shows the influence of the cloisters of Lisbon Cathedral. Despite the use of Late-Gothic tracery, the use of granite in its construction gives it a heavy-looking overall impression. Each corner of the cloister gallery has a marble Gothic statue of one of the Four Evangelists. The Capela do Fundador, the funerary chapel of bishop D. Pedro, builder of the cloisters, features his tomb with recumbent figure, a statue of the Archangel Gabriel and a polychromed statue of Mary. The upper storey of the cloisters, reachable via a spiral staircase, offers a grand view of the cathedral and the surrounding landscape.