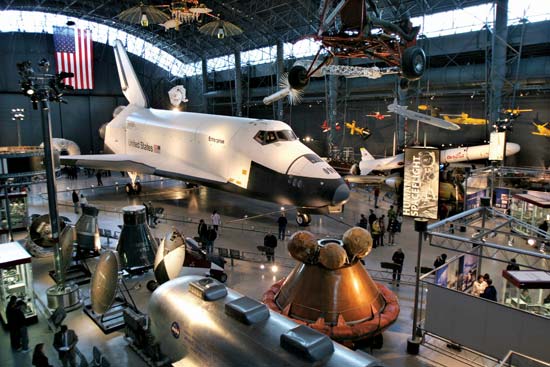 The National Air and Space Museum

It was established in 1946 as the National Air Museum and opened its main building near L'Enfant Plaza in 1976. The National Air and Space Museum is a center for research into the history and science of aviation and spaceflight, as well as planetary science and terrestrial geology and geophysics. Almost all space and aircraft on display are originals or backups to the originals. It operates an annex, the Steven F. Udvar-Hazy Center, at Dulles International Airport, which opened in 2003 and itself encompasses 760,000 square feet (71,000 m2). The museum currently conducts restoration of its collection at the Paul E. Garber Preservation, Restoration, and Storage Facility in Suitland, Maryland, while steadily moving such restoration and archival activities into its Udvar-Hazy annex facilities as of 2014. The Air and Space Museum takes visitors to the sky, showcasing the amazing technological achievements that have progressed aviation and space exploration throughout the last century. Our fascination with flight is still alive and well, as the museum (and the accompanying Udvar-Hazy Center) is one of the most visited in the world year after year. As you may imagine, the historical objects on display are fundamental to the story of flight. The 1903 Wright Flyer owns the distinction of flying the world’s first successful flight, and you can see the heavier-than-air flying machine in person. There’s also Charles Lindbergh’s Spirit of St. Louis, the first aircraft to complete a nonstop flight from New York to Paris. The Apollo 11 Command Module Columbia, the only portion of the Apollo 11 spacecraft to return to Earth, is prominently displayed in the ongoing Space Race exhibition. Visitors can also touch a sample of a lunar rock brought back from the Apollo 17 mission in 1972. A major makeover is in the works for the museum’s central exhibition space, which will reopen on July 1, 2016 as Boeing Milestones of Flight Hall as part of the museum’s 40th anniversary. The redesigned area will feature new and familiar objects (including The Enterprise from Star Trek!), a new open floor plan, more aviation and spaceflight stories and an exclusive mobile experience that will let visitors personalize their exploration like never before. The Air and Space Museum also features an IMAX Theater, a planetarium and a public observatory with a safe solar telescope so you can be a daytime stargazer. Daily tours are offered and educational events are available for children and adults. The museum science demonstrations and story times for younger children.