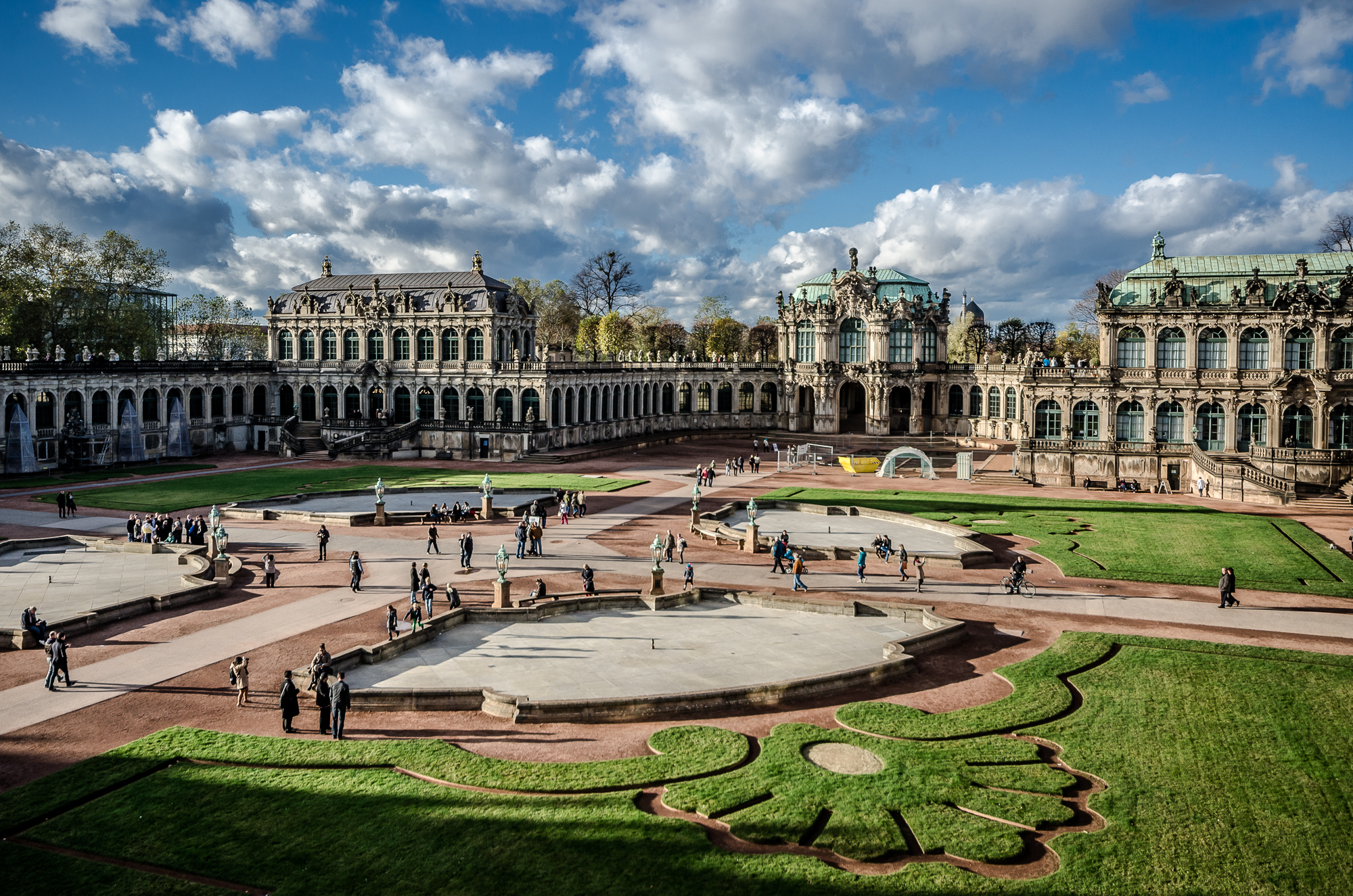 The name 'zwinger' means 'interspace' and originates from its location between former city fortifications. The Zwinger, with its large inner courtyard, was used for court festivities, tournaments and fireworks. The complex was built between 1710 and 1732 after a design by Matthäus Daniel Pöppelmann in collaboration with sculptor Balthasar Permoser. The Zwinger includes six pavilions connected by large galleries. The most impressive pavilions are the Rampart Pavillon (wall pavilion) and the Glockenspiel Pavillon (carillon pavilion). Rampart and Glockenspielpavilion The richly sculptured Rampart Pavilion, bounding the central courtyard to the northeast, is topped by a statue of Hercules, created by sculptor Balthasar Permoser. The almost symmetric Glockenspielpavilion at the other end of the courtyard was originally named Stadtpavillon but it was renamed after a carillon was installed between 1924 and 1936. Crown Gate robably the best known feature of the Zwinger is the Kronentor or Crown Gate, an impressive Baroque gate in the Langgalerie, on the southeast side of the Zwinger. The gate is topped by a large crown decorated with gilded motifs. The statues in the gate's niches represent the four seasons. Nymphenbad Near the Rampart pavillon is the Nymphenbad, a small enclosed courtyard with a baroque fountain featuring numerous statues of nymphs and tritons. Semperbau Originally the Zwinger had only three wings, the courtyard opened up towards the Elbe river. After the completion of the Semper Opera House in 1841 Gottfried Semper closed the courtyard by adding a gallery in Renaissance style. Construction of this new wing, now known as the Semperbau, started in 1847. The wing is also referred to as the Picture Gallery as it is home to the Gemäldegalerie Alter Meister (Old Masters Gallery), a museum with top-class works from famous artists such as Van Dyck, Vermeer, Rubens, Titian and Raphael (the Sistine Madonna). The wing also houses another museum, the Rüstkammer (armory), also known as the Historical Museum, with a large collection of weaponry Old Masters Gallery Armor in the History Museum from the fifteenth to the eighteenth centuries, including many weapons and harnesses used by the Saxon rulers. More Museums There are several other museums in the Zwinger's other wings, including the Porzellansammlung, a porcelain collection, located in the gallery left of the Crown Gate. The Mathematisch-Physikalischer Salon, near the Rampart Pavilion is a museum displaying a collection of scientific instruments including sextants, clocks and globes. Entering the Zwinger The main entrance of the Zwinger complex is the Crown Gate at the Ostra-Allee, but you can also enter via the Theaterplatz through a passage in the Picture Gallery.