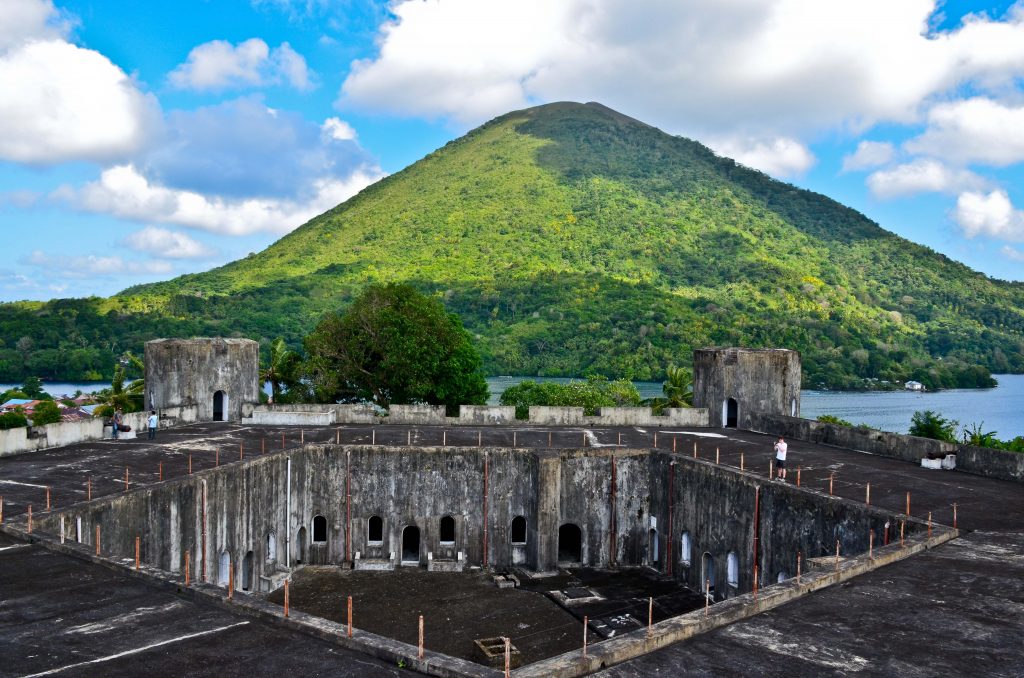 Located in the City of Fort Belgica Bandaneira, Banda Islands, Central Maluku district, Maluku Province, Indonesia. Atmosphere trail history of colonialism in the archipelago will be felt since the tourists arrived on the island of Banda. Not only when tourists nutmeg smell very strong on this island, but also when the travelers visiting the Fort Belgica. Being in the castle that holds a million stories in the early arrival this VOC, as if to invite us to return to visit Bandaneira situation in the 17th century. Despite nearly 400 years old, the castle is still well maintained. There does not appear there, for example, graffiti-graffiti on the walls of the fortress that reaches tens of centimeters thick that, as often occurs in several historic buildings in many places in Indonesia. In addition to the building which is still well maintained, the appearance of this fortress still looks sturdy and resilient. From the outside of buildings, many say that Fort Belgica which was built in 1611 is physically resemble the Pentagon building in Washington DC, USA. In fact, this castle has a nickname as The Indonesian Pentagon. Because, by design architecture building castle is the former headquarters of the VOC square-shaped pentagonal five aliases. Interestingly, when the fort was visible from one corner would be seen only four sides, though in fact has five sides like a square star. Another distinctive feature of the Early Modern Era-style castle is the existence of bastion-bastion fort in the building. Bastion is a crack in the wall of the fort which functioned as a place to put the canon or cannon's mouth. Mostly, this bastion bastion, facing the sea, or sehadap to face the castle. Visitors will see how this fortress was not only left many bastions and the walls of the giant, but also some who never used VOC cannon to dispel the 'rebel' by local residents and several sultanates of North Maluku, Sulawesi and at that time (between end of the 16th century to early 19th century). In the meantime, if visitors see of the castle, as described. construction of the fort consists of two layers of building (two floors). To enter, visitors must use the stairs to the original form of the ladder that can be removed (a kind of hydraulic ladder). Then, in the middle of the fortress there is a wide open space for the prisoners. In the middle of the open space there are two secret wells with a square shape that is said to connect the fort to the harbor and Fort Nassau is located on the waterfront. Still in the same source, on each side of the castle there is a tower. To reach the top of the stairs of the tower is available with almost upright position and a narrow outlet. From the top of the tower visitors can enjoy a panorama of some areas in Banda Islands, ranging from the blue waters of the Gulf of Banda, sunset (sunset), the peak of Gunung Api-a volcanic mountain in Bandaneira to a height of 667 meters above sea level-rise, until thick hundreds of trees nutmeg on the island of Banda Big. Take a walk around the fort is a very pleasant atmosphere while imagining the colonial period doeloe tempo. From the city of Ambon, the capital of Maluku province, you can use KM Ciremai Pelni Ships from Port of Yos Sudarso to go Bandaneira. The travel time required of this ship is seven (7) hour drive to the southeast of Ambon. Although looks dull, travel for 7 hours will be treated with stunning panoramic Banda Sea in the afternoon. Arriving at the Port of Yos Sudarso, you can search for public transportation in the port row to go to Fort Belgica. One of the public transport that can lead you to Fort Belgica is the rickshaws, motorcycle taxis, public transportation, or taxi. Travelers will find plenty of lodging in a variety of classes at City Bandaneira, Central Maluku, Maluku Province, one of which is located on Queen Street Liliselo and Port Road. Source: bestindonesiaislands.com