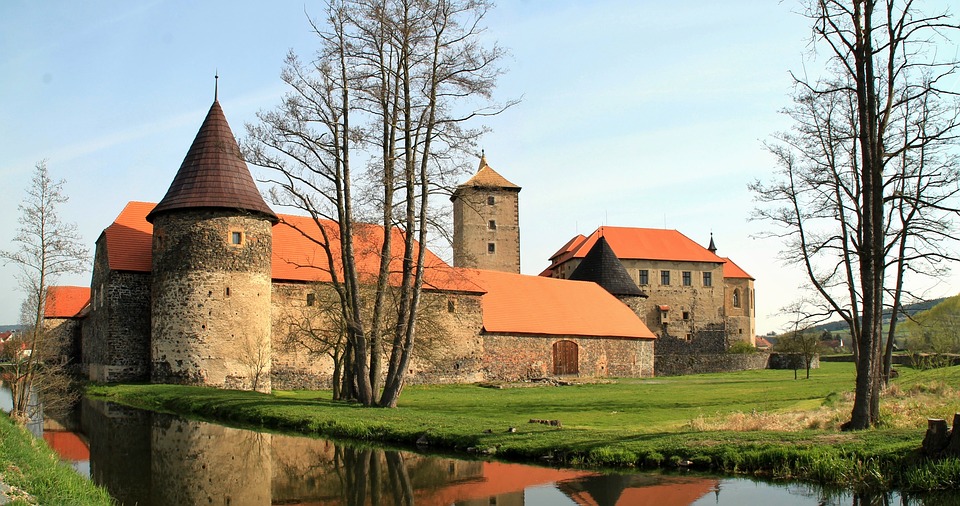 Svihov castle was built by the House of Rýzmberk ze Skály. It was besieged by the Hussites during Hussite wars, the garrison surrendered after their water moats were siphoned. It was rebuilt between 1480 and 1489 by the order of the castle’s owner, Puta Schwihau von Riesenberg, in the Late Gothic style. His sons continued in rebuilding the castle after he died and invited a famous architect Benedikt Reid. In 1598 Kavkové z ?í?an family took the control of the castle, but were forced to sell it to Czernins of Chudenitz 50 years later in 1598, due to their poor management. Then the Thirty Years‘ War came and the castle was unsuccessfully besieged by the Swedish army. Benedikt Reid invented the castle’s moat system with massive bastions (horseshoe shaped ground plans opened into the keep). He finished his works until 1520. He used the same system when he designed the fortification of one of the largest castles in Bohemia called Rabí. After the war, Habsburg emperor Ferdinand III. ordered the demolition of the castle, possibly out of fear for it being an „unconquerable fort of anti-Habsburg resistance“. Luckily, thanks to constant postponing of the demolition, only a part of rampart was damaged. Castle palaces, chapel and other parts of the bastion were used as a granary, devaluating the whole complex, yet protecting it from being rebuilt. The castle stayed in Czernin’s hands until the nationalization in 1945. Architecture Architecture The castle consists of two residential palaces, five-level entrance tower and a chapel built on top of the bastion. Only small parts of the rampart remained undamaged with four bastions -The Red Bastion, The White Bastion, The Green Bastion and The Gold Bastion. There were two water moats around the castle. The inner moat was placed where today’s inner courtyard is and the outer moat was between the inner and outer rampart (of which a part is still standing). If needed, the moats could be filled with water from three nearby ponds. The castle’s interior consists of typical late Gothic and Renaissance furnishings: furniture, rich tapestries, pewter and copper kitchenware, weapons and arms. Valuable wall paintings from the 16th century can be found in The Red Bastion, the chapel and in other rooms. Open to public are the castle’s armory, the kitchen (with original furnishings that originate mainly from the 18th century), the feast hall, the chapel, the bed chambers and The Great Hall with wooden cassette ceiling that originates from Dobrovice Castle. The castle's chapel was built between 1480 and 1489 by P. von Schwihau The exterior of the chapel remained mostly undamaged, the interior in the other hand was until its reconstruction in 1890. The stairs leading to the chapel were destroyed as well. The entrance hall has a net vault, it's ribs lean onto decorated consoles and converge into one paint keystone. The nave of the chapel is also vaulted, but all four ribs were rough-hewed for unknown reasons. References: Wikipedia