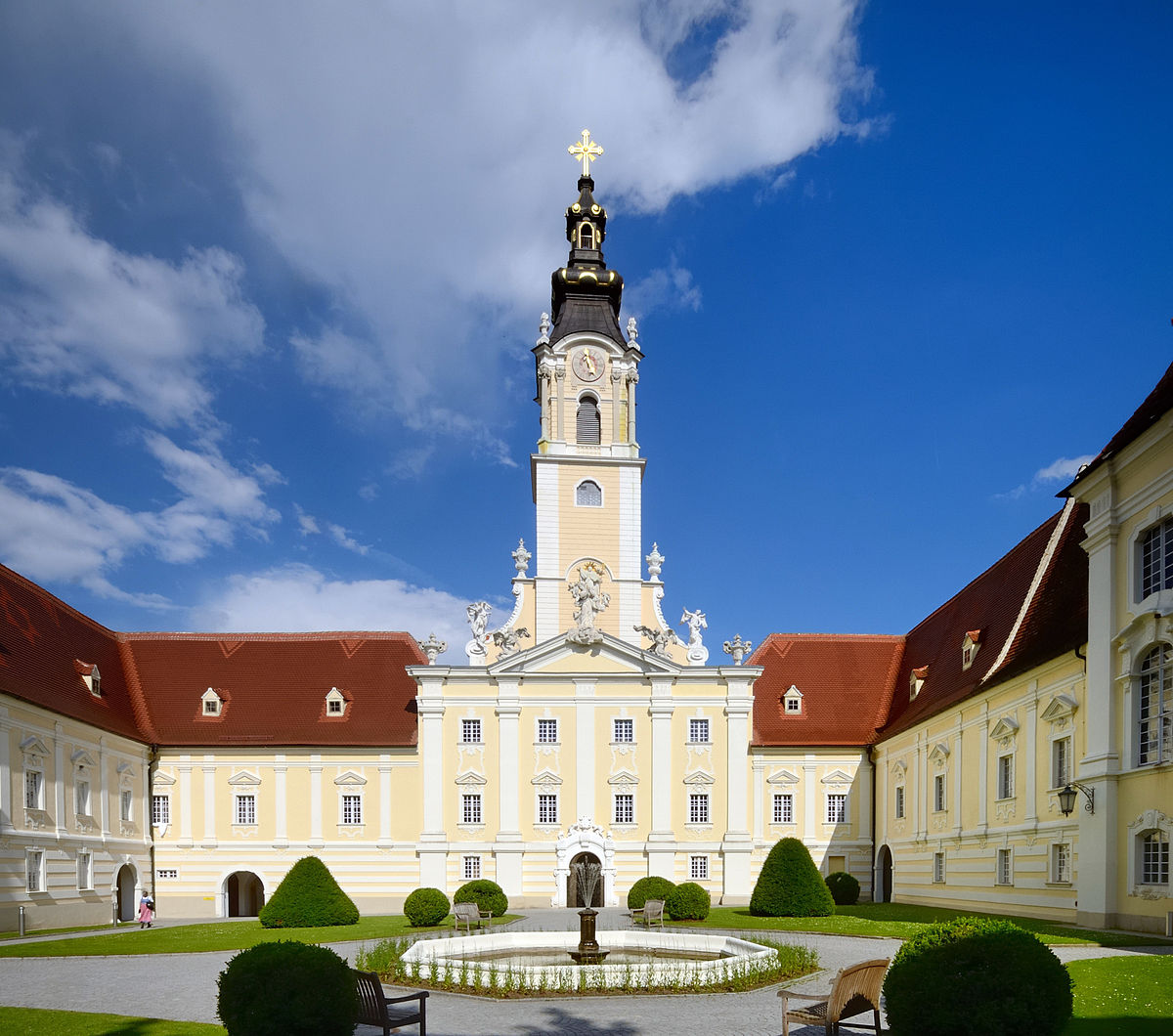 Altenburg Abbey was originally founded in 1144 by Countess Hildeburg of Poigen-Rebgau. The monastery was destroyed and reconstructed as a result of numerous attacks. The first was in 1251 by Hermann V von Baden, followed by several by the Cumans between 1304 and 1327 and during the Hussite Wars from 1427 to 1430. It was attacked by Bohemia, Moravia and Hungary in 1448, and by the Turks in 1552. In 1327, some restoration work was carried out by Gertrude, the widow of Heidenreich von Gars. In 1645, the Swedes destroyed the abbey. Refurbishment took shape after the Thirty Years' War in the 17th and 18th centuries. The abbey took its present form in the Baroque style under the abbots Maurus Boxler and Placidus Much. Work was carried out under the supervision of the architect Josef Munggenast who was assisted by some of Austria's most distinguished artists and craftsmen: Paul Troger for the frescoes, Franz Josef Holzinger for the stucco work, and Johann Georg Hoppl for the marbling. Under Emperor Joseph II in 1793 the abbey was forbidden to accept new novices, but unlike many others in Austria it succeeded in remaining functional. Subsequent to the Revolution of 1848, its debts were cleared by the sale of some of the chapel's major artifacts. On 12 March 1938, Abbot Ambros Minarz refused to fly the Nazi's Swastika flag at the abbey. from 17 March 1938. For a brief period between 1940–1941 under the National Socialists the abbey was suspended, and in 1941 dissolved. The abbot was placed under arrest and the community dispossessed. From 1945 the premises were used as accommodation by Soviet occupying troops. Under Abbot Maurus Knappek (1947–1968) the buildings were restored and the community re-established. Architecture The abbey displays a fusion of Baroque and Rococo stucco architectural styles in its interiors. During the reconstruction, the library, imperial staircase and marble hall were added. The staircase, abbey church and library are noted for the frescoes painted by Paul Troger. Those in the vestibule leading to the library are the work of his student, Johann Jakob Zeiller. The library, built in 1740, is of Baroque architectural elegance, an imposing room that rises to three stories in height. The library hall is 48 m long and its ceiling is decorated with frescoes crafted by Paul Troger. Among the many frescoes, the distinctive ones are the Judgment of Solomon, the Wisdom of God and the Light of Faith. Beneath the library is a large crypt which is also decorated with many frescoes by unknown artists; one particular scene which is fierce in appearance is that of the Dance of Death. The church is oval-shaped and bears a dome. It was renovated in 1730–33 by Joseph Munggenast. The dome is also decorated with Troger frescoes. The main feature of the altarpiece is a painting Assumption of Mary, topped by a representation of the Trinity. Gardens In recent years, a number of well-tended gardens in different styles have been developed around the monastery. They were all planted by the monks themselves with assistance from the Natur im Garten project as well as from nurseries in the area. Once the abbey park, Der Garten der Religionen (the Garden of Religions) is the largest of the gardens. It was recently used for growing Christmas trees and fruit trees. The garden now consists of five landscaped areas dedicated to the world's five main religions – Hinduism, Buddhism, Judaism, Christianity and Islam. It also has a large natural pond surrounded by a meadow full of wild flowers, a group of trees, and the old plum grove where the local livestock can be seen. References: Wikipedia