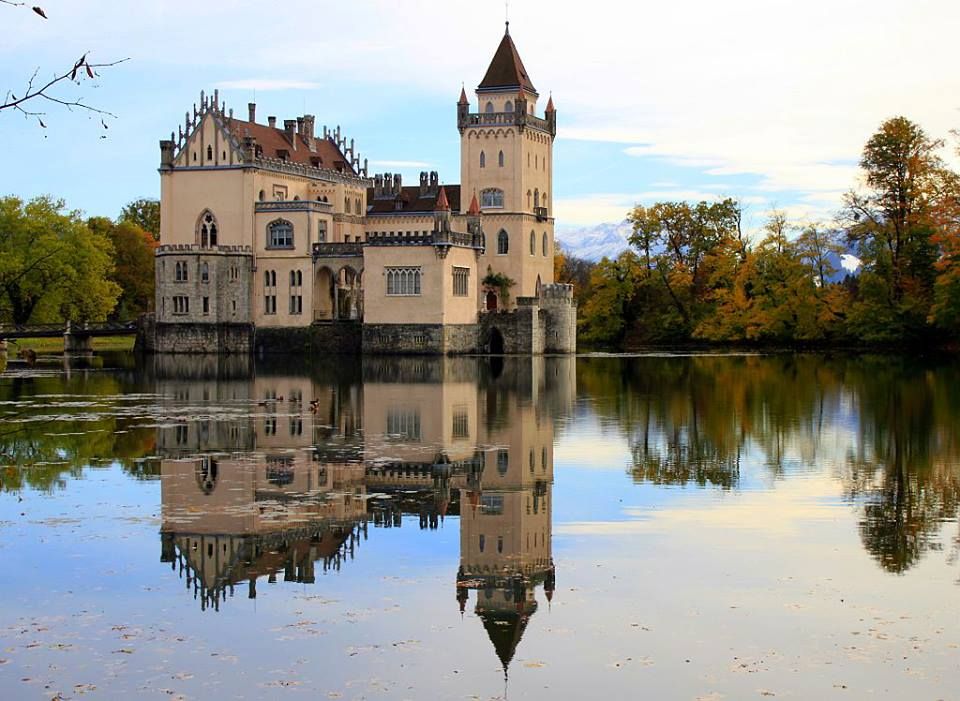 Anif Palace is located beside an artificial pond in Anif on the southern edge of Salzburg, Austria. The palace was once the seat of the bishops of Chiemsee, and then later was used as a court until the 19th century. It was remodeled between 1838 and 1848 in the neo-Gothic style. Anif is most famous for its use in several movies, including The Sound of Music. Its origins cannot be exactly dated but there is a document from around 1520 showing that a palace called Oberweiher existing at this location. Its owner was the dominion directory bailiff Lienhart Praunecker. From 1530 the water palace is mentioned regularly as a fief given by the respective Archbishop of Salzburg. In this way it was given to the bishops of Chiemsee after a restoration by Johann Ernst von Thun in 1693; from then on, the bishops used it as a summer residence. When Salzburg fell to Austria in 1806, the palace and the pond came into public ownership. The property was sold to Alois Count Arco-Stepperg in 1837. He rebuilt Anif Palace between 1838 and 1848 in new Gothic romanticizing style, and gave it its present-day look. Up to that time, the palace had simply consisted of a plain, four-story dwelling and a two-story connecting building to a chapel. After the death of the Count in 1891 the property fell to his nearest female relative, Sophie, who was married to the Count Ernst von Moy de Sons; the palace therefore ended up in the hands of his old French noble family. In 1918, the palace attracted public attention when King Ludwig III of Bavaria and his family and entourage fled to escape the November Revolution. With the Declaration of Anif on the 12/13 November 1918, Ludwig III refused to abdicate; however, he freed all Bavarian government officials, soldiers and officers from their oath because he was not able to continue the government. During World War II the German Wehrmacht units were accommodated in the palace, followed by American units in 1945. The Anif Palace is still privately owned by the family von Moy, who restored it fundamentally between 1995 and 2000. Public tours of this historic building are not provided. References: Wikipedia