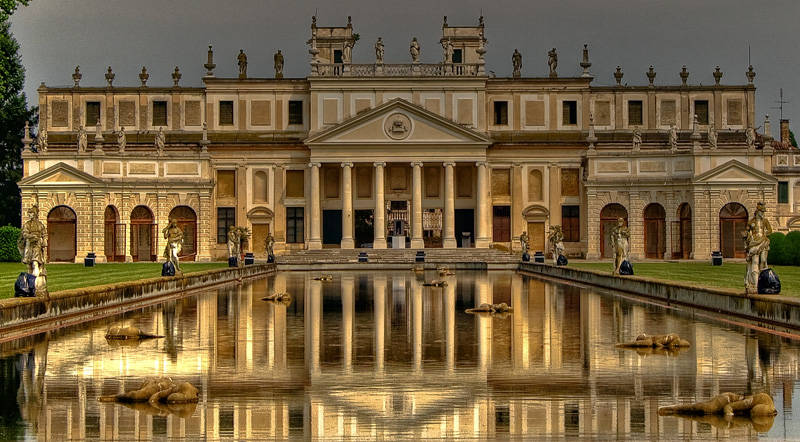 The construction was begun in the early 18th century for Alvise Pisani, the most prominent member of the Pisani family, who was appointed doge in 1735. The initial models of the palace by Paduan architect Girolamo Frigimelica still exist, but the design of the main building was ultimately completed by Francesco Maria Preti. The villa has on its walls the works of Giambattista Tiepolo and other famous painters. When it was built the building had 114 rooms, in honour of its owner, the 114th Doge of Venice Alvise Pisani. The most important room is the 'Napoleon Room' and its near bathroom, furnished with pieces from the Napoleonic and Habsburg periods and others from the Pisani period. In 1807 it was bought by Napoleon from the Pisani Family, now in poverty due to great losses in gambling. In 1814 the building became the property of the House of Habsburg who transformed the villa into a place of vacation for the European aristocracy of that period. In 1934 it was partially restructured to host the first meeting of Adolf Hitler and Benito Mussolini, after the riots in Austria. Architecture From the outside, the facade of the oversized palace appears to command the site, facing the Brenta River some 30 kilometers from Venice. The villa is part of a series of villas, which the Venetian noble families and merchants started to build in the 15th century. However, unlike the earlier buildings, which were designed as to be a pleasure house and an agricultural enterprise, Villa Pisani was primarily built as a demonstration of the power achieved by the family, since one of them, Alvise Pisani, was elected doge in 1735. The broad façade is topped with statuary, and presents an exuberantly decorated center entrance with monumental columns shouldered by caryatids. It shelters a large complex with two inner courts and acres of gardens, stables, and a maze. Giovanni Tiepolo decorated the massive frescoed ceiling depicting the Glory of the Pisani family (painted 1760–1762). Additional frescoes and paintings are by his son Gian Domenico Tiepolo, Crostato, Jacopo Guarana, Jacopo Amigoni, P.A. Novelli, and Gaspare Diziani. The bombastic allusions of the ceiling echo in the now uninhabited shell of a palace. The remainder of its nearly 100 rooms are now empty; on the first floor there are several rooms with furniture of the 18th and 19th century. References: Wikipedia