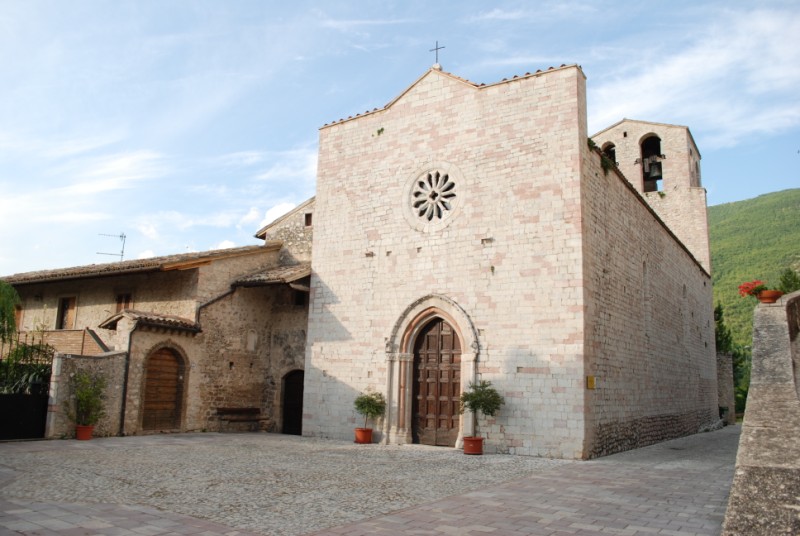 Franciscans enlarged the original church, dedicated it to St. Francis and turned one of the defence towers into a bell tower. In 1652, under the pontificate of Innocent X, the church was dedicated to St. Mary of the Assumption. The Franciscan church has a façade of ashlar stones in line with the Romanesque style of Spoleto, ends at the centre with a cusp and is characterized by a beautiful Gothic ogival portal decorated with capitals and friezes, surmounted by a rose window partitioned by 12 small columns. A mighty bell tower overlooks the presbytery and hosts in its wide belfry a major bell of the 14th century. The niche hosting the clock with weights is visible on the left wall. Several are the frescoes enriching the walls, and they are the artwork of artists belonging to the Giotto school, particularly Giovanni Boccati, Girolamo di Giovanni and of Peter’s dynasty, of the son Cola e its descendants Arcangelo di Cola and Giacomo di Cola. The apse was frescoed in 1383 by Cola di Pietro from Camerino together with Francesco di Antonio. Eleven saints are frescoed on the right wall, including St. Giuliano dressed with military garments, St. Antony Abbot, St. Peter, St. Paul, St. John Baptist, St. Giacomo Maggiore, St. Michael Archangel, a mural painting of the late 14th century attributed to Cola di Pietro from Camerino. Below there is a big fresco of 1415 depicting the Procession of Whites, of the same author. The fresco is one of the most complete sources of the Whites penitentiary movement that landed in Italy in 1399. Always on the same side but on the right of the second window there are: Anthony abbot; Gregory Magnus, crowned by a heraldry, shows a painting with the Saints Peter and Paul. If we go on we will find: an austere Madonna enthroned, dating back to the second half of the 15th century, has on her knees the Child with a sparrow. Next to it there are the paintings of St. Claire and St. Mary from Egypt. The penultimate group of frescoes is split into three registers: above, there is a Virgin enthroned breastfeeding her Child; on her right, the saints Rocco and Sebastian, painted in 1486 as protection against the cyclic plague of the Black Death. Below there is a blessing St. Gregorio Magno. On the right side a St. Peter martyr, stabbed by executioner heretics, also appears in the following group together with St. Sebastian. The sacristy houses, beyond a 15th century decoration with floral and geometric motifs, St. Anthony Abbot, St. Leonard, the Crucifixion of Christ, the Annunciation, St. Claire, all of whom are attributed to the Master of Eggi, of the 15th century. The church used to have a blue Cross (early 13th century), an artwork of a Spoleto master, today at the Diocesan Museum of Spoleto, that owes its name to its very characteristic range of colours, particularly lilac and blue.