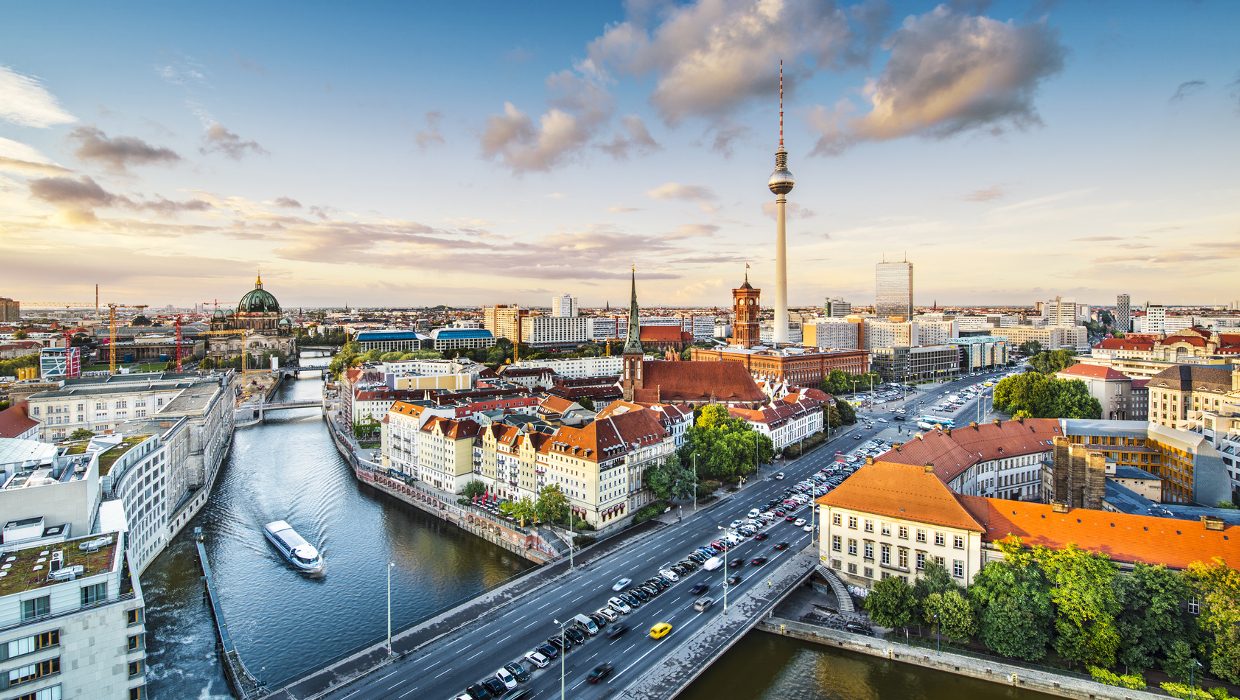 Berlin is the capital city of Germany and one of the 16 states (Länder) of the Federal Republic of Germany. Berlin is the largest city in Germany and has a population of 4.5 million within its metropolitan area and 3.5 million from over 190 countries within the city limits. he foundation of Berlin was very multicultural. The surrounding area was populated by Germanic Swabian and Burgundian tribes, as well as Slavic Wends in pre-Christian times, and the Wends have stuck around. Their modern descendants are the Sorbian Slavic-language minority who live in villages southeast of Berlin near the Spree River. In the beginning of the 13th century, two towns (Berlin and Cölln) developed on each side of the river Spree (today the Nikolaiviertel and the quarter next to it beyond the river). As the population grew, the towns merged and Berlin became a centre for commerce and agriculture. This area stayed small (about 10,000 inhabitants) up to the late 17th century, because of the 30 years' war in the beginning of the 17th century, which led to death of about half of the population. Brandenburg Gate Since the late 17th century, when large numbers of French Huguenots fled religious persecution, Berlin has welcomed religious, economic and other asylum seekers. In 1701 Berlin became the capital of Prussia and in 1710 Berlin and surrounding former autonomous cities were merged to a bigger Berlin. In 1871 Berlin became the capital of the new founded German Reich and a few years later, it became a city with more than one million inhabitants because of the immensely growing industry. After WW2 and the building of the wall, large numbers of immigrants from Turkey were invited to West Berlin to work in the growing industry sector; in East Berlin the jobs were done mostly by Vietnamese immigrants. But also people from other communist countries, including the former Yugoslavia, not to mention Soviet soldiers who refused to return home, have helped to make Berlin more multicultural than ever. Berlin is also a youth-oriented city. Before German unification, West Berliners were exempt from the West German civil/military service requirement. Social activists, pacifists and anarchists of all moved to Berlin for that reason alone. Musicians and artists were given state subsidies. It was easy to stay out all night thanks to liberal bar licensing laws, and staying at university for years without ever getting a degree was a great way to kill time. In contrast with most of Germany, Prenzlauer Berg is said to have the highest per-capita birth rate in Europe (in fact it just seems so because of the high percentage of young women in the district). After the fall of the wall, Berlin - especially the former East - has evolved into a cultural hub. Artists and other creative souls flocked to the city in swarms after reunification, primarily due to the extremely low cost of living in the East. Despite the increased prices and gentrification as a result, Berlin has become a centre for art, design, multimedia, electronic music, and fashion among other things. The particularly high number of students and young people in the city has only helped this cause. Just stroll down a street in Prenzlauer Berg, Friedrichshain, or Mitte to get a glimpse of the new East Berlin. Some famous artists of the region and their best-known works include Lucas Cranach the Elder, Lucas Cranach the Younger, Johann Gottfried Schadow, Marlene Dietrich (The Blue Angel), Leni Riefenstahl (Triumph of the Will), Bertolt Brecht (Threepenny Opera), Käthe Kollwitz, Kurt Tucholsky, Thomas and Heinrich Mann, Walter Gropius, Paul Klee, Friedrich Wilhelm Murnau (Nosferatu), Fritz Lang (Metropolis), Volker Schlöndorff, Wim Wenders (Wings of Desire (German: Der Himmel über Berlin)), Blixa Bargeld/Einstürzende Neubauten, Christopher Isherwood, Gunter Grass (The Tin Drum), members of the Bauhaus architectural movement and many more.